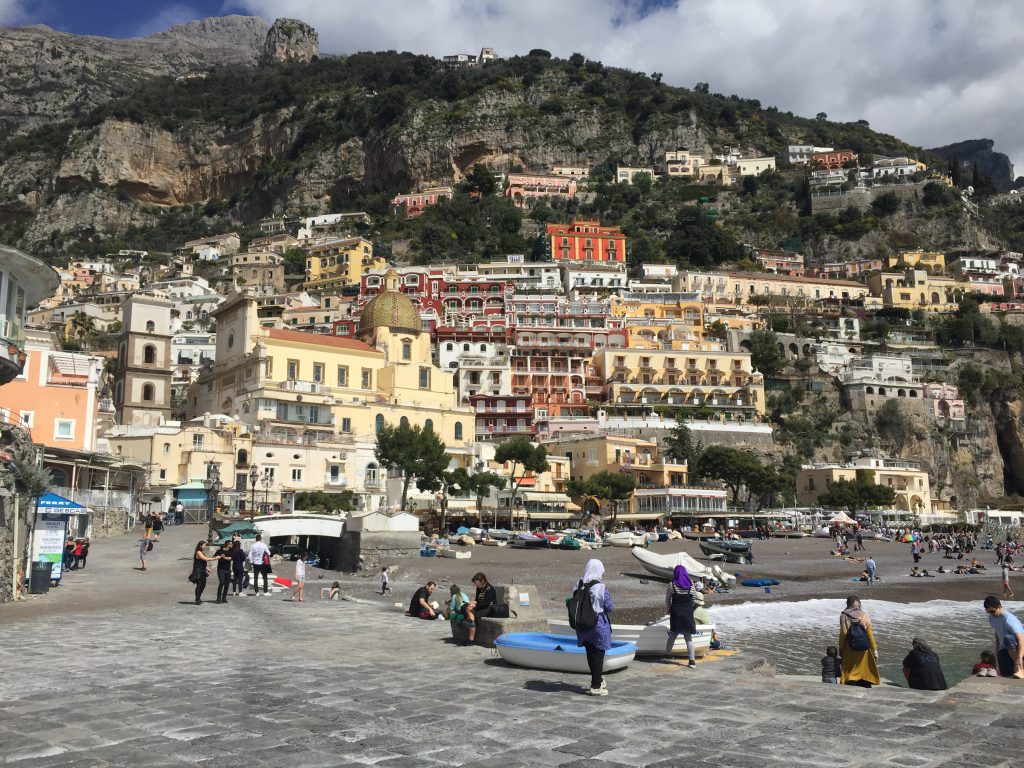 Most of my friends and followers know of my love of Italy, particularly Venice and the wondrous painted city of Bassano del Grappa to the north. Until now, only my close friends and family know I have struggled with major health issues over the past few years. I was diagnosed with Parkinson’s disease two and a half years ago, which has dramatically affected my mobility and my ability to write. I had practically given up on ever returning to Italy, until something incredible happened earlier this year!

Around Christmas time 2016, I gathered with family around the dinner table. An elderly lady sat down next to me and said: “if you don’t go back to Italy, you’ll only have regrets for the rest of your life”. It sounded to me like she knew only too well of how regrets can eat away at your soul. After dinner, without me knowing, she gave my son a bundle of cash notes to go towards my flight to Italy. Something was birthed that day that was far bigger than me! Before long, members of my family had saved enough money to send me back to Italy, along with a carer to look after me.

The highlight of my trip was returning to Hotel Danieli in Venice. The experience was so overwhelming that I feel compelled to write about the wonderful time I had. Although, I must admit, arriving in Venice was quite horrific to say the least – it almost cost me my life…

I woke early one ominous spring day in paradise. An alleged 5 star hotel, my room at Hotel Raito on the magnificent Amalfi coast was dark and depressing. I knew something was amiss – a rock hard bed with stained sheets, no working air conditioner, and a timeworn ceramic floor would have awarded no more than 3 stars in Australia. Having owned a 4.5 star apartment motel myself, I felt ripped off. Especially when I peered out the window towards a towering rock retaining wall as high as the hotel. Although I suffer from anosmia (impairment of smell)  the stench from the bins below filled my nostrils. I had to escape the room.

We loaded our baggage into the hire car outside reception before breakfast and left it in the care of concierge so we could depart quickly. After all, we only had about four hours until our flight departed from Rome airport. I must admit, the single defining feature of Hotel Raito was the incredible views over Vietri Sul Mare and Salerno from the terrace during breakfast. I didn’t dare try their cooked breakfast because my stomach was still churning from dinner at their overrated á la cart restaurant the evening before. My carer couldn’t stomach any breakfast, so she sat out on the terrace with a cup of tea in close proximity to the car. 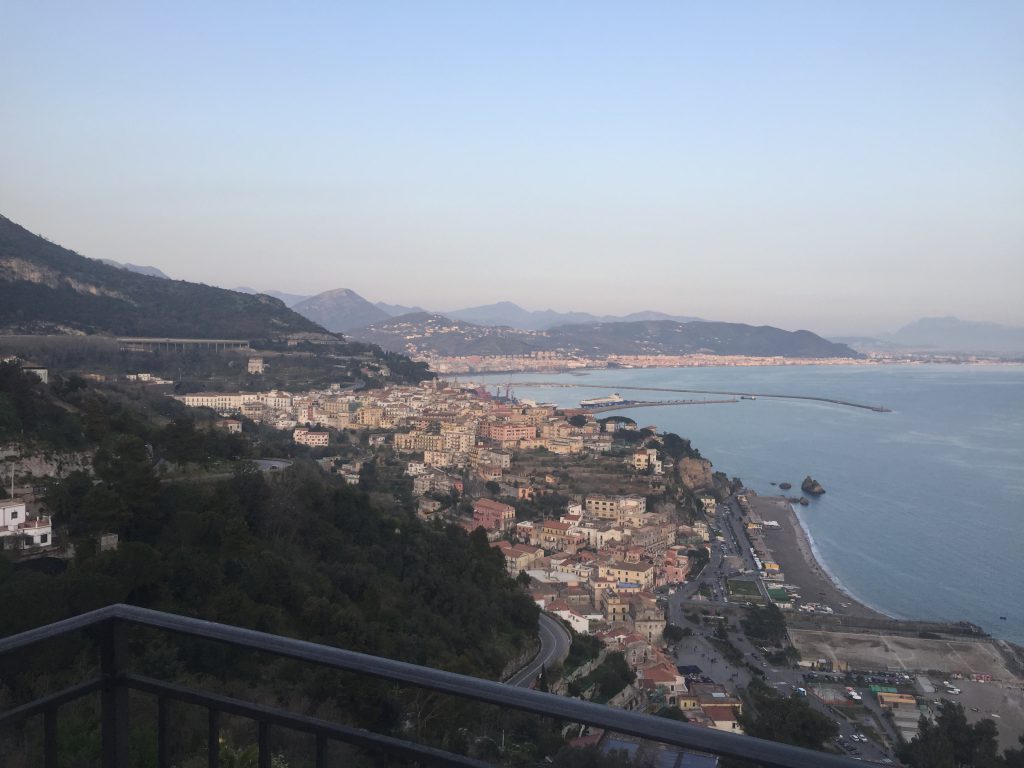 After throwing down a burnt coffee and a flaky croissant that was at least bought in, we headed down the E85 towards Leonardo da Vinci International Airport in Rome. Three hours later we arrived at the Avis returns carpark and an attendant opened the boot as I alighted the vehicle. I reached for my hand luggage from the boot and shock-horror suddenly hit me…my luggage, including all my medications, prescriptions, and even my CPAP sleep machine was gone! My carer’s hand luggage had disappeared too, along with her camera and hat!

I frantically phoned Hotel Raito. Their reply was disappointing to say the least, suspicious even, because they refused to assist or even check the video surveillance cameras for me. My carer sat by the car while I had breakfast. The only people she saw near the car were hotel staff, so I suspected it might have been concierge staff considering their refusal to assist. I phoned the Amalfi Police and not one of them could speak English, thereby adding to my frustration. I phoned my travel insurance company because I thought, they’ll help; that’s what they’re for! After all, I had the top of the line “ultimate”  cover that offers “peace of mind wherever you are in the world” with the best “overseas medical assistance 24 hours a day, every day of the year”. Except this day, of course!

When I finally got through to them on the telephone, they refused to assist me until I obtained a police report and filed a claim. Their idea of “overseas medical assistance” was to put me in touch with family members in Australia to assist with medical expenses!!!

The time came to board our flight to Venice, so we had no choice but continue on our journey. We arrived at Marco Polo Airport in Venice late that afternoon. Checking into the Annia Park Hotel near the Airport, a cold, blunt young Venetian fellow in a suit standing behind the reception counter was not the least bit interested in our horrific day, or my plea for medical help, so I tried to phone the Australian Consulate in Venice. I phoned the listed number and the line was disconnected. Unfortunately, there is no Australian Consular Official in Venice anymore – more budget cuts I suppose! I then phoned the Consulate in Rome and they had already closed for the day…

The night was long and sleepless without my CPAP machine. I dared not fall asleep, otherwise I’d wake choking, or worse, pass away in the night. To add to my predicament, I didn’t have any cardiac, asthma or Parkinson’s medications that night, nor the following morning. After the travel insurance company had abandoned me, I had nobody to turn to, so I kept phoning the Australian Embassy for assistance. I finally spoke with someone in the Australian Embassy late the next morning before leaving Annia Park Hotel. At least Embassy staff were helpful I thought, after they emailed me four names of cardiologists and general practitioners I could see in Venice. We hitched a ride over to the cruise terminal and jumped on the Alilaguna ferry to San Zaccaria station, landing right outside Hotel Danieli. 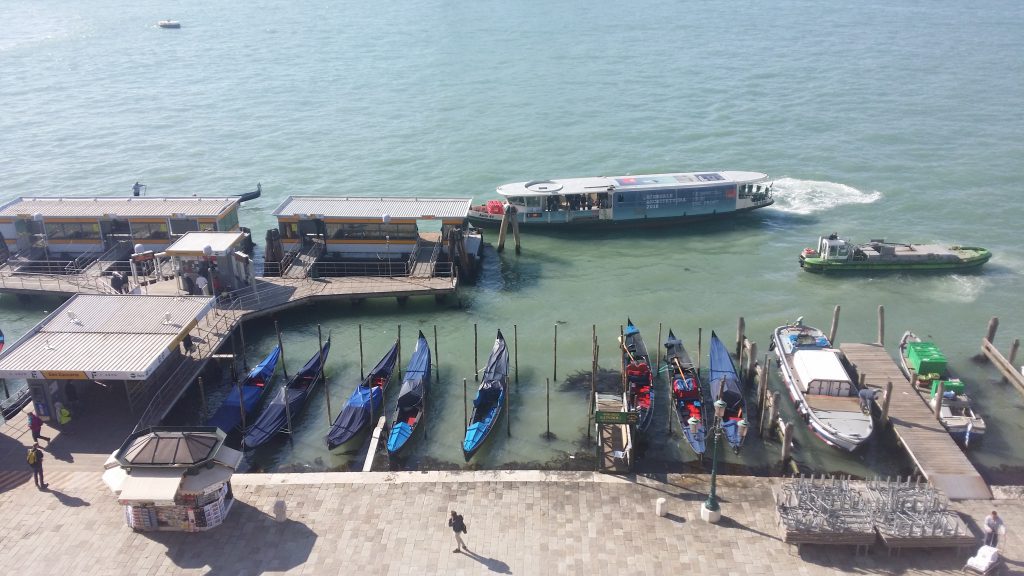 After dropping our luggage at Hotel Danieli, we headed off in search of the doctors provided by the Australian Consulate in Rome. The closest cardiologist in San Marco turned out be a family planning practice (Lol!), and the other two cardiologists were over an hour and two hours away by private water taxi. That left one general practitioner in the middle of Cannaregio – a whopping 3.1km walk (which I simply couldn’t do), and they didn’t even answer the telephone. This was most likely because most of the businesses in Venice close for lunch at around 12:30pm and don’t re-open until 3:00pm. So we turned to Hotel Danieli for assistance as timing was critical.

The staff and management of Hotel Danieli were absolutely fantastic. When I explained what had transpired, they said they’d look after it. After a brief phone call, they directed us to a local pharmacy around the corner operated by none other than the Lupo family. Not only did they provide emergency medications without a prescription, but they ordered me a new CPAP machine pre-programmed from the settings I remembered. The only catch was: it would take 3-4 days to arrive using express post, so I was faced with four more sleepless nights ahead.

With my medications in hand, I headed back to Hotel Danieli looking for a bottle of water along the way. By this time, my blood pressure was through the roof… I had a shocking headache, chest pain, and I was struggling to breathe. I had put up with the chest pain for hours and the veins in my hands were visibly swollen… like fat little sausages trying to burst through my skin. I knew I was in dangerous territory…

Finally, we passed a shop with water for sale and I quickly downed the meds. By this time, it was all too little too late. As I came through the magnificent revolving timber doors of Hotel Danieli, I felt my heart gurgling and a stabbing pain in the middle of my chest. It was as if my mitral valve had gone on holidays… I felt my blood pressure drop suddenly as my heart began to race. I knew that terrible feeling only too well – it was a nasty bout of Ventricular Tachycardia (arrhythmia) that just about flattened me in the middle of the hotel foyer.

As my carer asked for the key to my room from concierge, I screamed for “GTN” (Glyceryl Trinitrate), and she ran with her little red bottle of immortality that had saved my life more than once. I started to fall in the hotel foyer, almost crashing through their glass display cases. I was scooped up immediately by Davide, one of the concierge staff, who placed me into a golden tub chair nearby. My carer administered GTN and aspirin while Davide went for a wheelchair. It was as if Davide had done this before, because he seemed to know exactly what to do in a cardiac emergency.

Later in the day, my carer explained that in my semi-unconscious state I simply refused to be taken to hospital. Why? Apparently I had argued with them all, “because it will ruin my holiday”. Instead, they took me by wheelchair to my room and laid me upon the bed. The hotel prepared for the worst, with a water taxi on standby ready to take me to the Venice Ospedale (hospital).

I remember waking a couple of hours later – choking on my own tongue. I opened my eyes and it was pixelated and there was light shining all around me. I wondered whether I was in heaven. Yet, I could hear gulls calling and the gentle sound of water lapping upon the sides of gondolas nearby. There were two windows in my room, both opened wide directly onto the Grand Canal with a line of gondolas below. 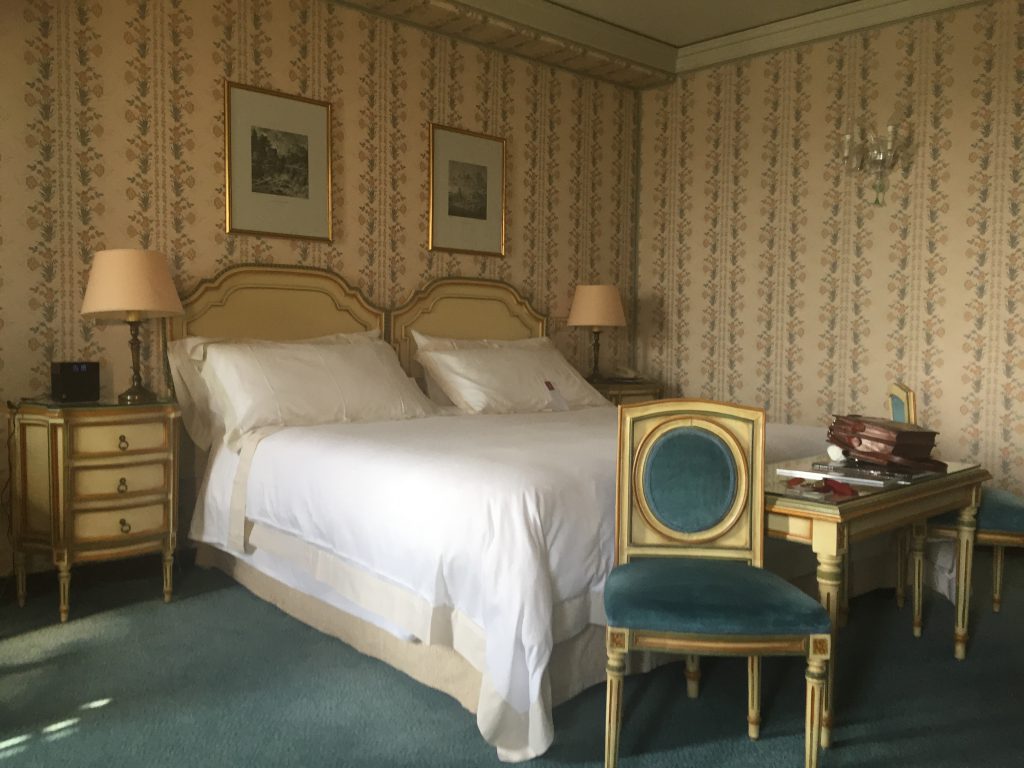 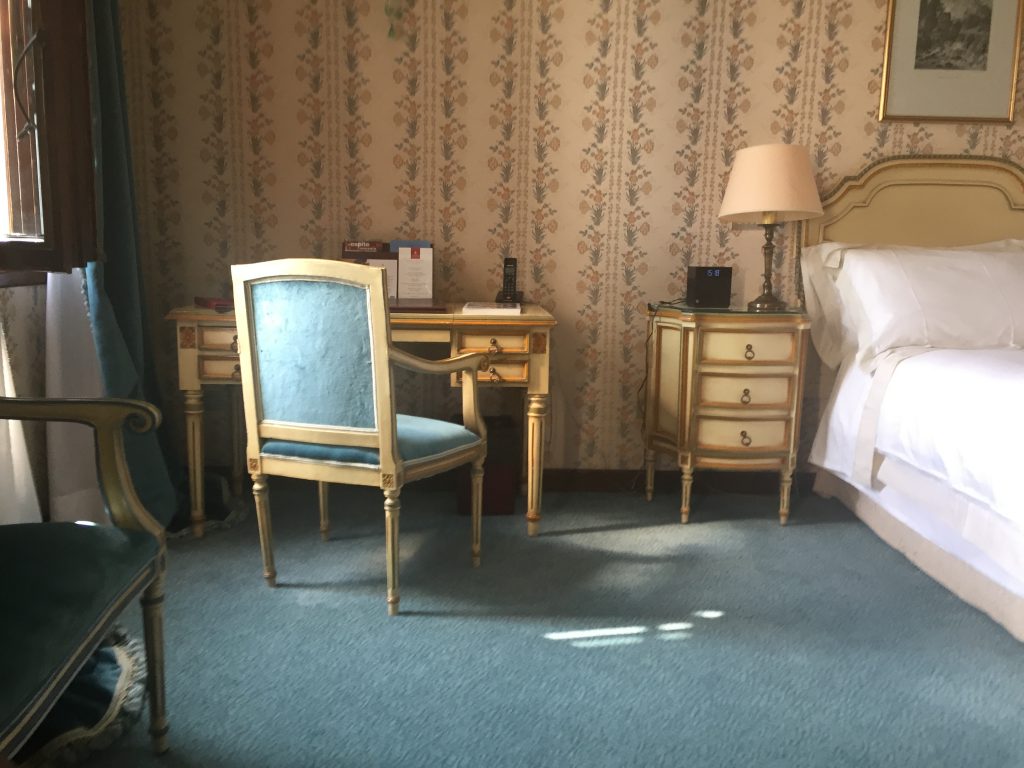 Lavishness in every direction overlooking La Serenissima … the most stunning hotel room I had ever seen in my life! I felt like the Doge of Venice with an unrivalled Lagoon Suite on the first floor of Casa Nuova Palazzo (New Palace House). Most of the hotel rooms in Venice I had previously stayed in were just large enough for a dwarf and a handbag… my suite at Hotel Danieli was a luxuriously appointed palatial suite fitted out with embroidered pink and blue floral tapestry to the walls, Murano glass fixtures, and an extravagant marble bathroom. To top it off was a bed like no other in the world… it was fit for the Doge himself.

What an incredible feeling waking up in Hotel Danieli with an awe-inspiring panoramic view of unrivaled perspective, peering over San Giorgio Maggiore Church with gondolas in the forefront just below my window. I laid there for a couple of hours taking in the view as the sun slowly set over Lagoona Veneta. It was simply perfect! 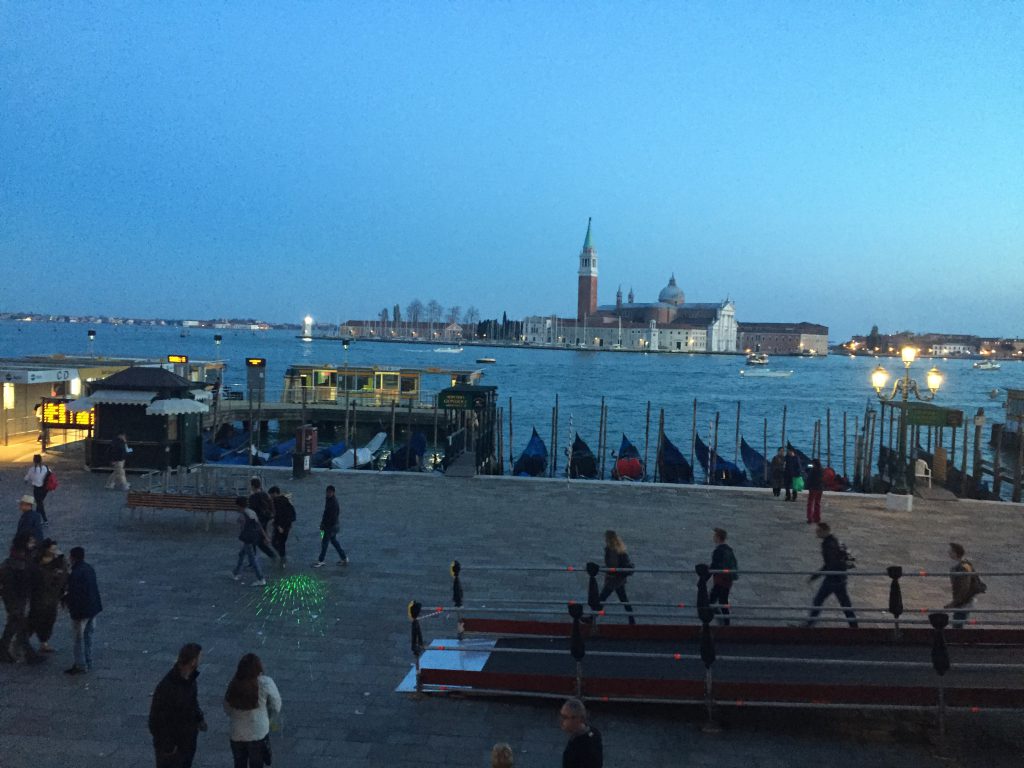 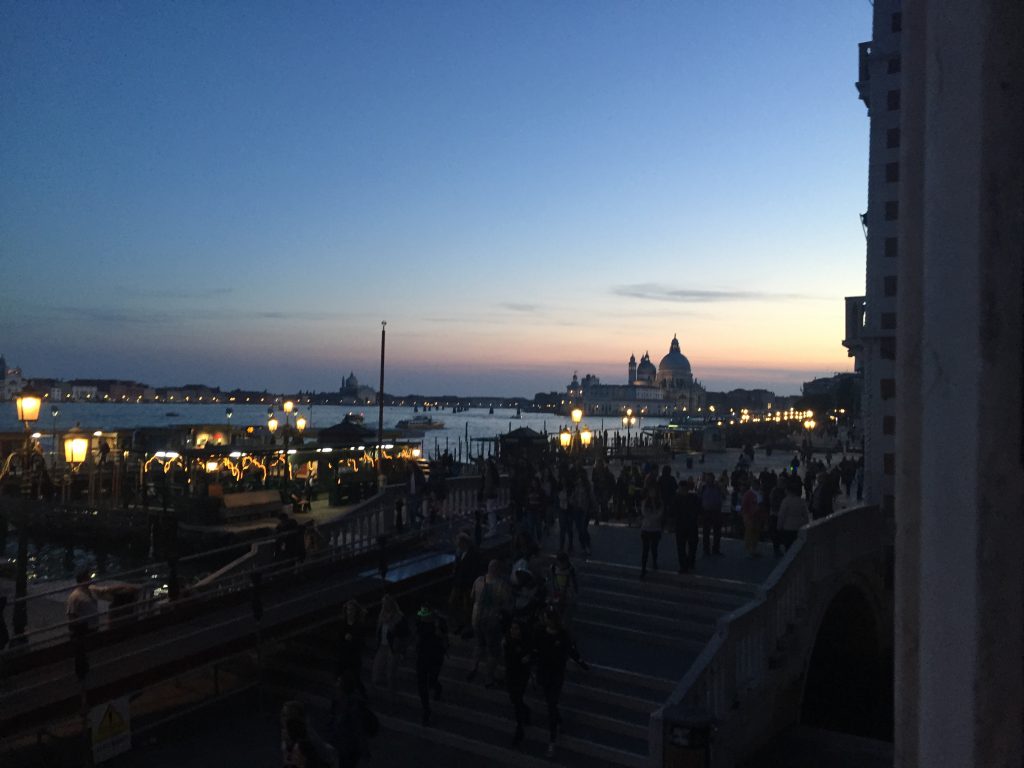 If it were not for my carer and the quick-thinking staff of Hotel Danieli, I honestly believe I would not be alive today. I cannot praise the General Manager, Mr Silver Carpanese, and his staff enough, especially Davide for helping save my life. This was only the beginning – Mr Carpanese turned my tragic holiday into the best holiday of my life!