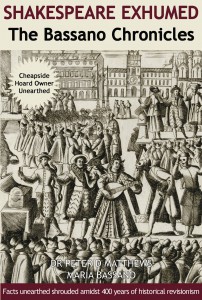 William Shakespeare is viewed today as the quintessential English writer who has continued to influence art, poetry, philosophy and even science for over four centuries. His graphic imagery of Venice, Padua and Verona carefully braided with poignant tragic wreckages of real life circumstances, shrewdly infused with the ancient Kabbalah and transcendent Platonism was nothing short of genius. That is, if he ever put pen to paper! Notable academics, musicians, composers, and a number of historians have significantly debated the literary works attributed to William Shakespeare over the past two decades. Many of those who have undertaken studies have done so from a musical or literary perspective, but none have dared to examine the historical records as a forensic historian, carefully and painstakingly stripping back the generations of sodden debris that have entangled and concealed countless buried secrets. These chronicles reveal documentary evidence to confirm who really penned the Shakespearean canon. For centuries these works have been accoladed as the very basis of English literature, yet the author might not have been English at all! Amidst the mischief, mayhem and murder, these chronicles answer all the questions, including one of the greatest discoveries of all time – who owned the finest collection of Venetian, Italian and Byzantinian jewellery in the world – The Cheapside Hoard.

Available from all good bookstores.