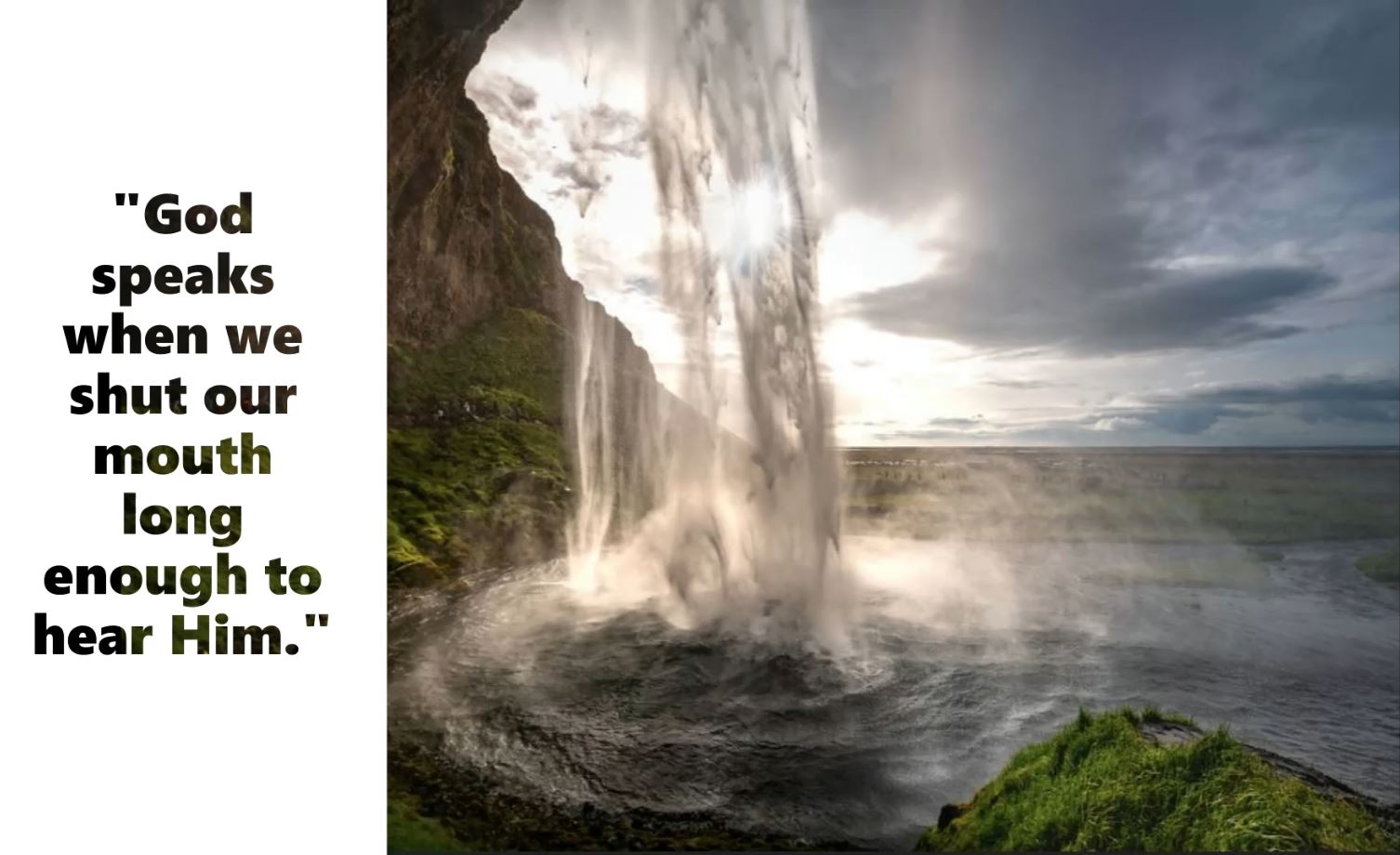 When King Solomon was a young king, the Lord appeared to him in a dream, asking, “What do you want? Ask, and I will give it to you!” He could have asked for riches, fame, long life, happiness, but no, Solomon didn’t ask God for any of these things. He replied, “Give me a heart that listens so that I can judge your people and tell the difference between good and evil. After all, who can judge this great people of yours?” (1 Kings 3:9) Continuing from my previous message, the ‘Just Men’ need to have a heart that listens to God.

Sometimes we don’t know all the answers. We need to listen to Holy Spirit who is trying to speak into our lives. Most of the time, we are just too busy to “listen”. Holy Spirit speaks through visions, dreams, or speaks directly into our spirit if we are prepared to “listen”. Sometimes the most profound encounters with God happen at the lowest moments in our lives. Why? Not because of any lack on God’s part, but because we have just become so hungry for the power of Jesus Christ in our lives. “Draw near to God, and He will draw near to you” (James 4:8).

Joseph was a ‘Just Man’ who listened and obeyed even when he didn’t understand what God was doing in his life. He waited patiently for the word of the Lord, thinking and planning every “Just” action in his life not to disgrace Mary, hoping the Lord would speak to him. Matthew 1:18-25 tells us about Joseph:

This is how Jesus the Messiah was born. His mother, Mary, was engaged to be married to Joseph. But before the marriage took place, while she was still a virgin, she became pregnant through the power of the Holy Spirit. Joseph, to whom she was engaged, was a righteous man and did not want to disgrace her publicly, so he decided to break the engagement quietly.

As he considered this, an angel of the Lord appeared to him in a dream. “Joseph, son of David,” the angel said, “do not be afraid to take Mary as your wife. For the child within her was conceived by the Holy Spirit.  And she will have a son, and you are to name him Jesus, for he will save his people from their sins.”

All of this occurred to fulfill the Lord’s message through his prophet:

“Look! The virgin will conceive a child!

She will give birth to a son,

and they will call him Immanuel,

which means ‘God is with us.’”

When Joseph woke up, he did as the angel of the Lord commanded and took Mary as his wife.  But he did not have sexual relations with her until her son was born. And Joseph named him Jesus.[1]

Sometimes God doesn’t come to speak to us until we have made the wrong decision. Did you notice Joseph being a ‘Just Man’ had “decided to break the engagement quietly”, then an angel of the Lord appeared to him? He wants to allow us free will and examine our hearts, then gently gives us another opportunity to choose the right path. This can again be done by prophecy, word, Holy Spirit speaking into our heart, an angel of the Lord, or even Creation speaking to us, like something happening around you that influences you. Now this can be good or evil, so we must learn to discern the difference over time. Sometimes, unfortunately, this can be from making bad choices as well as good choices, but both choices are learning opportunities.

If we examine the life of Joseph again, we find that Jesus was born in Bethlehem according to prophet Micah, but King Herod had heard of the birth of a Messiah from the ‘Three Wise Men’ and asked them to return with his location. Instead they travelled home because they didn’t trust the king. Matthew 2:13-15 tells us:

After the wise men were gone, an angel of the Lord appeared to Joseph in a dream. “Get up! Flee to Egypt with the child and his mother,” the angel said. “Stay there until I tell you to return, because Herod is going to search for the child to kill him.”

That night Joseph left for Egypt with the child and Mary, his mother,  and they stayed there until Herod’s death. This fulfilled what the Lord had spoken through the prophet: “I called my Son out of Egypt.”[2]

Joseph didn’t question his dream, he didn’t moan about being uprooted, it simply says, “that night Joseph left”. He didn’t say, ‘maybe I had too much wine, or question his dream because he had pizza last night’. He just left as soon as he awoke in the night with the dream. He obeyed immediately without question, by faith.

If we hesitate, and ponder it, or refuse to obey, God will let us do that. Yes, we have free will to walk away and say “no, I’m not doing that!”, but I can tell you that you will probably go around the mountain, making your journey longer and harder until you end up on your knees or come back to the same place you started. I am speaking from experience. That’s not a place you want to go… You’ll end up feeling like that little dwarf, singing that song, “I’m a Dwarf and I’m digging a hole, diggy diggy hole, I’m digging a hole!”[3] Believe me, it is best to obey immediately when you hear His voice. Stand in faith, and act immediately.

A ‘Just Man’ always has a Listening Heart

Just as the Angel of the Lord said to Joseph in his dream, “Stay there until I tell you to return, because Herod is going to search for the child to kill him” Joseph didn’t question, he stayed until he had another dream telling him to go back. Matthew 2:19-23 tells us:

When Herod died, an angel of the Lord appeared in a dream to Joseph in Egypt. “Get up!” the angel said. “Take the child and his mother back to the land of Israel, because those who were trying to kill the child are dead.”

So Joseph got up and returned to the land of Israel with Jesus and his mother.  But when he learned that the new ruler of Judea was Herod’s son Archelaus, he was afraid to go there. Then, after being warned in a dream, he left for the region of Galilee. So the family went and lived in a town called Nazareth. This fulfilled what the prophets had said: “He will be called a Nazarene.”

Joseph was always listening, waiting for the call of God to stand, or in this case to return to Israel. Proverbs 4:18 tells us: “The path of the just is like the morning sun, shining brighter and brighter until midday”. God is always willing to guide us each day, “like the morning sun” speaking of Shekhinah, the manifest presence of God who guided the Israelites toward the Red Sea and delivered them from Pharaoh, and the Egyptians were no more.

What most people don’t know is why Jesus was called a Nazarene. It’s not just because he lived in Nazareth. He dwelt amongst the Nazarene sect of Jewish Essene’s of his mother Mary and her family. Jesus was not a Pharisee, Sadducee or Zealot – he was a Jewish Essene – a Nazarene! This is the very same Jewish Essene sect that produced the Dead Sea Scrolls at Qumran in close proximity to the Dead Sea. They were scattered throughout Judea. Many of the teachings and parables of Jesus are found in the earlier texts of the Essenes. Herein lies a key principle of Christianity and Judaism that has been lost for centuries and was only rediscovered by scholars around 60 years ago. Why did God give Joseph a dream to go to Nazareth? To fulfil the prophecy,[4] and for Jesus to learn the way of the Essenes of Mary’s ancestors.

Joseph knew the Scriptures, but he also listened to God speaking to him through his dreams. He was a ‘Just Man’ who obeyed immediately when God spoke to him. Despite his own beliefs, he allowed his son to be raised as a Jewish Essene according to the ways of his mother and her family. We too must listen to the voice of God always, who waiting for us to sit and talk with Him. If I ever want to be known for anything, may it be “the man who listened to God” because hearing His voice is like sweet music to my ears. It is better than chocolate, and I love chocolate!!! Psalm 63:1 tells us:

O God, you are my God; I earnestly search for you. My soul thirsts for you; my whole body longs for you in this parched and weary land where there is no water.

In drought, what did Jesus promise us? In John 7:37-38, He said, “Anyone who is thirsty may come to me! Anyone who believes in me may come and drink!”  We are promised: “Rivers of living water will flow from his heart” (John 7:38). Now this is something you can bank on when you are struggling. Go into your prayer closet, shut the door, and pour your heart out to Him. God speaks when we shut out mouth long enough to hear him. Prove Him in this – He will answer! I have seen it in my own life time and time again, God is faithful to those who are willing to listen. Selah.

© 2019 inclusive Rev Dr Peter D Matthews. All rights reserved. This paper may be freely used for academic purposes or for the pulpit, subject to citing Rev Dr Peter D Matthews as the author. Keep abreast of my website at www.petermatthews.com.au, or you can like my Facebook page for updated material. My academic profile is also available on Academia.com and Google Scholar.