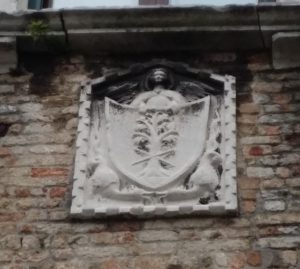 During my time in Venice, I meandered through the ancient streets, carefully scanning the architecture. I came across the above coat-of-arms on the wall of a multi-storey brick building in the Spanish part of the Jewish Ghetto, not far from the Museo Ebraico di Venezia. Close by the museum is a medieval building of brick and stone, believed to be one of the earliest synagogues in Venice, dating back to the late 15th and early 16th century. Inside is a plague erected, recognizing the early contributions of the Bassano family of Rabbis in Venice.

As most people know, the Bassanos were recognized as Master Kabbalists, physicians, teachers, authors (Heironymus, Antonio and Emilia in the very least), musicians, makers of diverse musical instruments, and even heretics because of their Jewish books of  Kabbalah. They are probably least known as the Jewish “Songbirds” of Venice and England. A little known performance was on Sunday 6 August 1710 by Richard Bassano and his brother Christopher Bassano, the Vicar Choral at St Oswald’s Church in Derbyshire.

There are Church notes to confirm his brother Richard visited the church in 1710 to set up the new organ with Thomas Cook, both of Staffordshire. In true family tradition, after the service had concluded, Richard Bassano played “a grave sonata” in an “elaborate Italian manner” before a church full of people. He sang Psalm 121 “as an anthem” and “set a new standard to be aimed at”,[1] most likely with Christopher on violin:

I look up to the mountains— does my help come from there?

My help comes from the LORD, who made heaven and earth!

He will not let you stumble; the one who watches over you will not slumber.

Indeed, he who watches over Israel never slumbers or sleeps.

The LORD himself watches over you! The LORD stands beside you as your protective shade.

The sun will not harm you by day, nor the moon at night.

The LORD keeps you from all harm and watches over your life.

The LORD keeps watch over you as you come and go, both now and forever.[2]

Please note, the word ‘Israel’ in the Hebrew language depicts the ‘Hebrew nation’ – the Jews.[3] It should also be noted that Philo revealed the practice of singing psalms originated from the Jewish Essenes.[4] The fact that the Bassano family held Jewish, predominantly Essene traditions, is of particular interest as we investigate the origin of the Shakespearean works filled with Jewish Essene imagery.

The Essenes were early Kabbalists, as were the entire Bassano family. Psalm 121 is used by Kabbalists with amulets “to ward off Lilith, the Queen of demons”.[5] There was a pocketsize Medieval Jewish book used by Kabbalists called Sefer Shimmush Tehillim (Book On the Use of Psalms) that was also banned by the Index Librorum Prohibitorum of 1559, alongside the Bassano’s Kabbalistic books. Sefer Shimmush Tehillim claims if a person sings Psalm 121 reverently seven times, you will be safe from all evil occurences by angelic protection.[6]

In essence, Psalm 121 is used as an invocatory verse, calling on the angels Ieiaiel (angel 22, for protection against storms – Invocation Psalm 121:5), Melahel (angel 23, for safety and against weapons – Invocation Psalm 121:8), and Mikael (angel 42, for safety and discovery of conspiracies – Invocation Psalm 121:7), all of which are part of the 72 Angels of Shemhamphorasch.[7] The Bassano brothers were effectively clearing out the demons that bound the Church in religion, invoking angelic protection over the Church, and in doing so, called upon Mikael to root out evil conspirators within the Church. These are the very same angelic imageries weaved into Shakespearean works. What was the result, you may ask?

This performance by Richard Bassano sparked a revival in Derbyshire with 5,000 people from all the neighbouring gentry filling the Church on 13 September 1710 to hear the orchestra with Christopher Bassano on violin. The celebrations continued most of the day with a concern in the evening at Blackamoor’s Head Inn.[8] I suggest this is an interesting lesson for modern pastors today.

The coat-of-arms I found in Venice with the tree of life, two crossed swords, and an angel host above is quite interesting. Could this be another early coat-of-arms of the Bassano family with further Kabbalistic imagery of angelic protection?

For further information, please refer to my major academic work of ‘Genesis of the Shakespearean Works’ due to be released in early 2017. More information is also available on my website at www.petermatthews.com.au, or you can like my Facebook page to keep abreast of any updated material I find.

[5] Levine, F (2000), The Use of Scripture in Practical Kabbalah. http://kabbalah.fayelevine.com/letters/pk010.php

[6] Sefer Shimmush Tehillim (Book On the Use of Psalms): Psalm 121. Also found in The Sixth and Seventh Books of Moses (Part 2) translated by Joseph Peterson (2005). http://www.esotericarchives.com/moses/67moses2.htm

[7] Burkle, William S. (2015), The Seventy-Two Angels of the Shemhamphorash: Their Derivation, Correspondences, and Invocation, pp. 10-11. http://utahsricf.org/wp-content/uploads/2015/10/SHEMHAMPHORASH-ASTROILOGY-PAPER-PRINT-VERSION-SRICF.pdf

The Tinworths of Ballarat: A True Rags to Riches Story